ALLISON VISITS BRIDGES IN FRANCE WITH THEIR DESIGNER MICHEL VIRLOGEUX 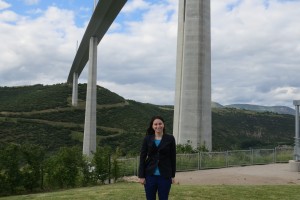 PhD student Allison Halpern recently had the opportunity to travel to France to follow up on her Master’s thesis research on French structural artist Michel Virlogeux. During her trip she visited the Millau Viaduct, the world’s tallest bridge, and the Terenez Bridge, the first curved cable-stayed bridge in France and the world record holder for the longest main span for curved cable-stayed bridges. Michel Virlogeux is the original designer of the Millau Viaduct, which opened in 2004, and the designer of the Terenez Bridge, which opened in 2011.