Large-span shells and membranes exhibit fascinating mechanical behaviors because geometric nonlinearities arise even when their material properties are linear. Their shape and topology give them properties beyond what is possible with conventional structural systems.

For example large span shells are non-linear redundant systems: they share their loading throughout the surface and can thus aid in preventing progressive collapse. Aneecdotal evidence of the survival of the San Francisco City Hall Cupola (1906) and the Los Manantiales Shells (Mexico City, 1985) suggests that shell roofs remain intact and safe during and after extreme earthquake events. We demonstrated that shells owe this seismic resistance to their large geometric stiffness and low mass, which lead to high fundamental frequencies well above the driving frequencies of earthquakes. Using modal analysis, the R-funicularity ellipse method, and time-history analysis, we developed an approach that identifies the frequency content of different local shell zones, and links that content to the dynamic efficiency of the shell. This new approach enables resiliency studies of existing shell buildings and can inform heritage preservation efforts. For the shape generation of arches and shells in seismic regions, we presented novel optimization and form finding approaches  as well as the first geometries for compression-only shells under seismic loading. One such approach relies on the construction of funicular polygons and generates shells with corrugations. Using a non-linear pushover analysis, we discovered that by tailoring the corrugation wavelength and the depth, the shell’s lateral loading capacity could be increased by as much as 80% before it collapses. The proof that corrugations can substantially increase the loading capacity in large-span shells opens up new avenues for the design of robust and resilient infrastructure.

The knowledge we generate, advances the fields of solid mechanics, dynamics, lightweight structure design and can be adopted in other large-scale structures (e.g.  protective tsunami barriers) to achieve better resilience for a wide range of natural and manmade hazards. 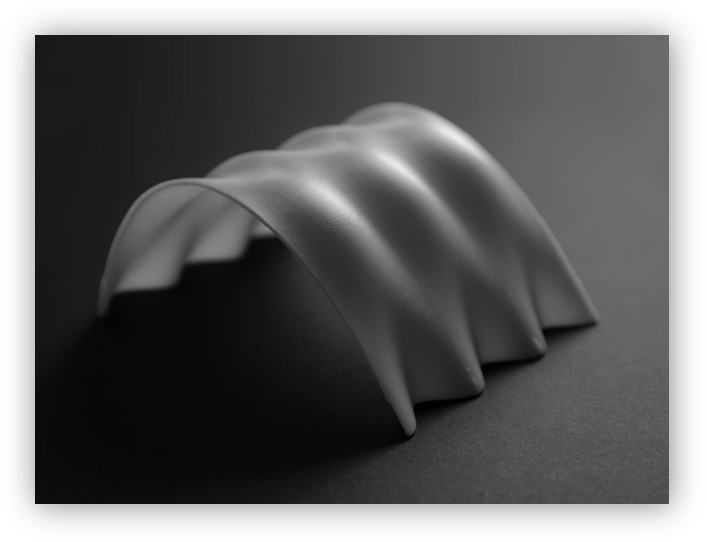