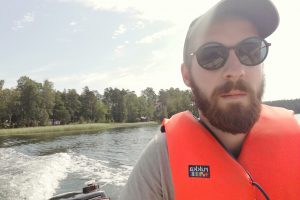 I joined the Form Finding Lab in September of 2019 to pursue a PhD in Civil Engineering. Prior to this, I completed a 5-year B.A.Sc. at the University of Toronto, followed by a 2-year M.A.Sc. where I worked on the topic of torsion in reinforced concrete shells. This research involved testing two large-scale shell elements and deriving a novel finite element for the modelling of reinforced concrete members. Upon graduation, I joined Arup as a structural engineer, and worked on the design and construction of the following structures: Billy Bishop Pedestrian Tunnel, Lassonde School of Engineering, York University Subway Station, Pearson Airport Terminal 1 Expansion, Canadian Canoe Museum, LiveNation Toronto VIP Viewing Deck.

I gravitated to structural engineering for its rigorous technical underpinning, while still demonstrating potential as a field to operate at a fundamentally humanistic scale – bridging the gap between art and science. Also, with two historians as parents, I was infused at a young age with an appreciation for the monuments and relics left behind by prior civilizations, and the challenges of piecing together a coherent story based on limited information. I believe that this interplay of culture, interpretation and application is what drew me to the Form Finding group; we build models of reality, based on limited information (i.e. data), to impact the built environment. In my research, I plan to explore the interdisciplinary topics of digital fabrication and construction automation at the intersection of architecture and engineering – looking specifically at self-supporting masonry construction, augmented reality (AR) assisted construction, and prefabricated reinforced concrete formwork.