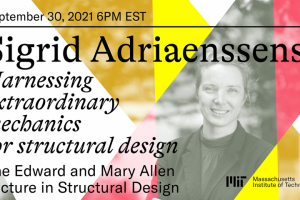 Master builders throughout history have made significant strides in exploiting forms to enclose three‐ dimensional spaces, to provide shelter or to bridge two‐dimensional voids, such as water and roadways. In absence of numerical prediction methods, they resorted to trial and error construction practices or structural theory to establish a good enough structural form. Pier Luigi Nervi, structural engineer and designer of the exquisite Little Sports Palace (Rome, Italy, 1958), stated: ‘Resistance due to form, although the most efficient and the most common type of resistance to be found in nature, has not yet built in our minds those subconscious intuitions which are the basis for our structural schemes and realizations’ [1]. I place my scholarship in this force‐modeled form tradition and focus on the advancement of analytical and computational approaches to predict and design the overall properties, stability, and failure of structural surfaces. In particular, I am interested in shells, membranes, and rod networks because they exhibit fascinating mechanical behaviors. I will talk about how we discovered, studied, designed and built surfaces that efficiently carry extreme loading, self-lock, adjust their stiffnesses, morph shape, or amplify motion. We have used these extraordinary mechanics to innovate systems ranging from macro-scale adaptive shading devices to medium-scale robotically constructed waste-free vaults and large-scale storm surge barriers.