PUBLICATION: Effect of Gravity on the Scale of Compliant Shells 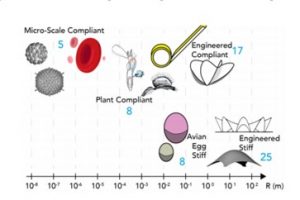 Abstract: Thin shells are found across scales ranging from biological blood cells to engineered large-span roof structures. The engineering design of thin shells used as mechanisms has occasionally been inspired by biomimetic concept generators. The research goal of this paper is to establish the physical limits of scalability of shells. Sixty-four instances of shells across length scales have been organized into five categories: engineering stiff and compliant, plant compliant, avian egg stiff, and micro-scale compliant shells. Based on their thickness and characteristic dimensions, the mechanical behavior of these 64 shells can be characterized as 3D solids, thick or thin shells, or membranes. Two non-dimensional indicators, the Föppl–von Kármán number and a novel indicator, namely the gravity impact number, are adopted to establish the scalability limits of these five categories. The results show that these shells exhibit similar mechanical behavior across scales. As a result, micro-scale shell geometries found in biology, can be upscaled to engineered shell geometries. However, as the characteristic shell dimension increases, gravity (and its associated loading) becomes a hindrance to the adoption of thin shells as compliant mechanisms at the larger scales-the physical limit of compliance in the scaling of thin shells is found to be around 0.1 m.