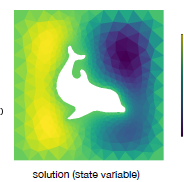 Optimizing the parameters of partial differential equations (PDEs), i.e., PDE-constrained optimization (PDE-CO), allows us to model natural system from observations or perform rational design of structures with complicated mechanical, thermal, or electromagnetic properties. However, PDE-CO is often computationally prohibitive due to the need to solve the PDE—typically via finite element analysis (FEA)—at each step of the optimization procedure. In this paper we propose a mortized finite element analysis (AmorFEA), in a neural network learns to produce accurate PDE solutions, while preserving many of the advantages of traditional finite element methods. This network is trained to directly minimize the potential energy from which the PDE and finite element method are derived, avoiding the need to generate costly supervised training data by solving PDES with traditional FEA. As FEA is a variational procedure, AmorFEA is a direct analogue popular amortized inference approaches in latent variable models, with the finite element basis acting as the variational family. AmorFEA can perform PDE-CO without the need to repeatedly solve the associated PDE, accelerating optimization when compared to a traditional workflow using FEA and the adjoint method.