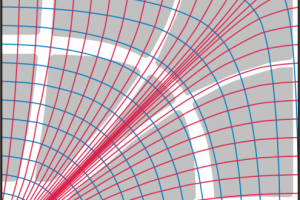 The Ribbed floor slab systems of Pier Luigi Nervi: This paper presents an historical and analytical evaluation of the ribbed floor slab systems developed by the Italian structural artist Pier Luigi Nervi (1891-1979). The historical discussion  includes the evolution of the floor slab from a non-structural element to an inspired structural system, culminating in Nervi’s patented ribbed floor systems. While the isostatic inspiration for the rib patterns of Nervi’s floor systems is well-documented, the method used to generate these patterns is considerably unknown by comparison. The methods of experimental stress analysis identified by Nervi and the mathematical theories available prior to the 1949 isostatic floor system patent are discussed to clarify the means used to generate the isostatic lines. An Isostatic Line Tool developed for this paper is used to evaluate the correlation between the isostatic lines and Nervi’s arrangement of ribs for the Gatti Wool Factory, Palace of Labor, and Large Sports Palace floor systems. This tool can be used by designers in the conceptual design phase to develop ribbed floor systems inspired by Nervi.

Nervi’s cantilevering stadium roofs: discipline of economy leads to inspiration:Although he came from a tradition that built magnificent palaces and churches, the Italian master builder Pier Luigi Nervi is arguably mostly known for his sports infrastructure.  In this paper, we focus on his first (Giovanni Berta Stadium, Florence, 1930-1932) and last (Olympic Flaminio Stadium, Rome, 1957-1959) internationally widely recognized stadium with cantilevering roof.  Through literature studies and structural analyses, we compare and contrast these two stadia on the basis of their structural and constructional efficiency, economy and design intent within the specific social-political context of the interbellum and post-World War II era in Italy.  The interpretation of these studies shows Nervi’s clear progression from imitation, innovation to inspiration in his stadium design. More specifically shortage of construction materials and skilled labor did not constrain his projects but drove Nervi to design and build great structures.

Norfolk Scope Arena: A US dome with a unique configuration of interior ribs and buttresses: This paper compares Pier Luigi Nervi’s Norfolk Scope Arena (Norfolk, VA, US, 1970) to his earlier domes and to other long span concrete domes built in the United States of America (US) in the 1960s and 1970s.  The first objective is to show the progression in Nervi’s dome designs. This paper identifies chronologically when interior ribs and buttresses (inclined columns), prominent elements at Scope Arena, initially appear in Nervi’s domes. The second objective is to demonstrate the various ways Nervi details these elements in his domes. After showing this diversity broadly across eight of his works, the paper describes specifically how the interior ribs and buttresses are configured at Scope Arena and then compares this arrangement to those of the visually different Little and Large Sports Palaces (Rome, Italy 1957 and 1960, respectively). The third objective is to show that Scope Arena’s ribs and buttresses give the shell a unique form among other US domes from the same era. Comparisons in this paper seek to place Scope Arena in the context of its contemporaries so that its contributions to the field of thin concrete shell roofs can be better understood.