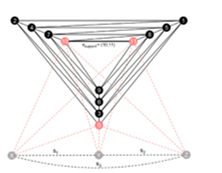 This paper presents a fabrication-informed design method for triangulated space frame structures that remain stable during all phases of their robotic assembly and disassembly without requiring external scaffolding. A graph theoretic framework, based on rigidity theory, is developed to allow the structure, its support conditions, and the impact of robotic support constraints to be simultaneously represented in a single topological framework. The structural system is sequentially designed with an assembly logic based on Henneberg graph-construction steps, which are executed with two robots through a cooperative rigidity-preserving sequence. Ensuring planarity of the resulting graph during these construction steps is shown to lead to intrinsic disassembly potentials within the system. A graph-based algorithm is presented to locate, isolate and remove locally rigid tetrahedral cells formed in the structural system. This algorithm is then utilized to compute a rigidity-preserving robotic disassembly sequence. The design method is demonstrated in the case study design of a wooden space frame arch structure that is robotically (dis)assembled.