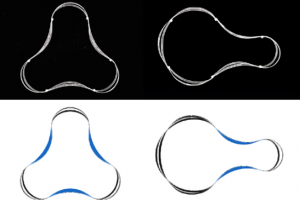 In this study, we explore the mechanics of a bigon and a bigon ring from a combination of experiments and numerical simulations. A bigon is a simple elastic network consisting of two initially straight strips that are deformed to intersect with each other through a fixed intersection angle at each end. A bigon ring is a novel multistable structure composed of a series of bigons arranged to form a loop. We find that a bigon ring usually contains several families of stable states and one of them is a multiply-covered loop, which is similar to the folding behavior of a bandsaw blade. To model bigons and bigon rings, we propose a numerical framework combining several existing techniques to study mechanics of elastic networks consisting of thin strips. Each strip is modeled as a Kirchhoff rod, and the entire strip network is formulated as a two-point boundary value problem (BVP) that can be solved by a general-purpose BVP solver. Together with numerical continuation, we apply the numerical framework to study static equilibria and bifurcations of the bigons and bigon rings. Both numerical and experimental results show that the intersection angle and the aspect ratio of the strip’s cross section contribute to the bistability of a bigon and the multistability of a bigon ring; the latter also depends on the number of bigon cells in the ring. The numerical results further reveal interesting connections among various stable states in a bigon ring. Our numerical framework can be applied to general elastic rod networks that may contain flexible joints, naturally curved strips of different lengths, etc. The folding and multistable behaviors of a bigon ring may inspire the design of novel deployable and morphable structures.