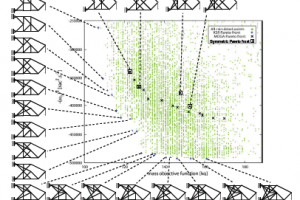 This paper addresses single and multiobjective topology optimization of truss-like structures using genetic algorithms (GA’s). In order to improve the performance of the GA’s (despite the presence of binary topology variables) a novel approach based on kinematic stability repair (KSR) is proposed. The methodology consists of two parts, namely the creation of a number of kinematically stable individuals in the initial population (IP) and a chromosome repair procedure. The proposed method is developed for  both 2D and 3D structures and is shown to produce (in  the single-objective case) results which are better than, or  equal to, those found in the literature, while significantly increasing the rate of convergence of the algorithm. In the multiobjective case, the proposed modifications produce superior results compared to the unmodified GA. Finally the algorithm is successfully applied to a cantilevered 3D structure.