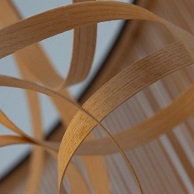 In this paper, we present a 3-dimensional elastic beam model for the form-finding and analysis of elastic gridshells subjected to bending deformation at the self-equilibrium state. Although the axial, bending, and torsional strains of the beam elements are small, the curved beams connected by hinge joints are subjected to large-deformation. The directions and rotation angles of the unit normal vectors at the nodes of the curved surfaces in addition to the translational displacements are chosen as variables. Based on the 3-dimensional elastic beam model, deformation of an element is derived from only the local geometrical relations between the orientations of elements and the unit normal vectors at nodes without resorting to a large rotation formulation in the 3-dimensional space. Deformation of a gridshell with hinge joints is also modeled using the unit normal vectors of the surface. An energy-based formulation is used for deriving the residual forces at the nodes, and the proposed model is implemented within dynamic relaxation method for form-finding and analysis of gridshells. The accuracy of the proposed method using dynamic relaxation method is confirmed in comparison to the results by finite element analysis. The results are also compared with those by optimization approach for minimizing the total potential energy derived using the proposed formulation.