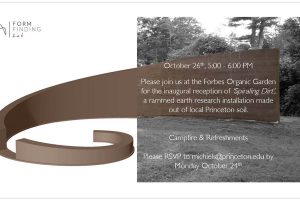 This rammed earth spiral is entirely made out of local, Princeton soil. It revisits a traditional vernacular construction technique used in New Jersey in the 19th century, and throughout the past 3 millennia around the globe. Rammed earth deserves renewed attention because of its sustainable potential as a low-cost zero-emission material. Local soil, coated with a lime-dirt mixture for erosion protection was densely compacted into a temporary wooden formwork. The spiral’s performance over time will be monitored as an ongoing Campus as a Lab research project of the Form Finding Lab in the Civil and Environmental Engineering Department.