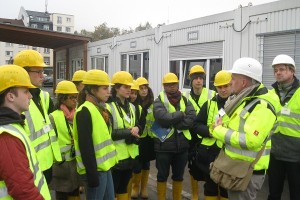 “Class on German thin-shell structures yields new exhibit” reads the title above a movie SEAS made about our CEE463 class.  CEE463 is a focused study of one “theme” that changes every year. The first theme, in the academic year 2010-2011 we had chosen the theme of tall buildings. This time, in the academic year 2012-2013 we chose shells, and in particular German shells as this is the birth place of modern shells, and also this is the place where the shell engineering is the most advanced and spreads into the XXI century.  Enjoy watching the movie!